AI is a powerful tool for asset managers, especially ‘quant’ funds. But there are few quick wins. Investment in people and infrastructure, hard work, and patience, are all required to outperform the market. Artificial Intelligence (AI) has been around since the 1950s. And in finance, quant funds have used AI techniques since the 1980s. So it might seem surprising that AI has only recently dominated conversations about the future of business, and the future of asset management. It’s because over the last five to ten years, AI has undergone a revolution.

Used for decades in asset management

The pioneer of AI in asset management was mathematician and Cold War code breaker James Simons, who founded the quantitative hedge fund Renaissance Technologies. In the 1980s, he recruited outside of finance – scientists, cryptographers and experts in speech recognition theory – to successfully develop models that predicted price movements of financial instruments. Some brought with them early AI techniques. Leonard Baum is one example. He co-developed the Baum-Welch algorithm, which had elements of ‘self-training’, but its execution still required significant human intervention.

The main AI techniques used today – neural networks, support vector machines and random forests – have been around since the 50s, 60s and 90s, respectively. But armed with many new, freely available data sources, as well as cheap and increased computing power and data storage facilities, scientists have been able to advance these techniques, and their applications, very rapidly over the last few years. Their use and sophistication has also increased because many developers have made the tools used to build them available as open source software. So organisations can test AI techniques in real world situations without developing their own algorithms from scratch. ‘Deep neural networks’, which fall into the ‘machine learning’ subset of AI, is one technique that has recently produced impressive results and found widespread application: playing classic board games; image recognition; natural language processing; and, of particular relevance to asset management, making predictions from data.

Like a human brain, it learns by practice and feedback, not by processing a long set of rules. This makes it a powerful tool in asset management. When market characteristics change, a neural network can adjust its calculations accordingly. [See boxout 2]

Many applications in financial services

Some AI applications simply automate tasks previously done by humans. Others perform new analyses that couldn’t be done before. Financial services back offices are particularly ripe for automation. Many tasks are repetitive and do not require high levels of human cognitive ability. The fraud detection and anti-money laundering processes of customer on-boarding at a bank are good examples. These require extensive extraction and processing of information from documents. Machines using advanced image recognition and language processing technology can ‘read’ and ‘understand’ the contents of these documents far more efficiently than a team of humans, whatever the size. They can identify suspicious transactions from bank statements, and they get more and more accurate the more transactions they analyse. In the fundamental research function of asset management, AI powered tools can now be deployed to conduct analyses that were previously impossible to do. Algorithms can scan the web; read and interpret millions of documents and audio clips; recognise sentiment in text or voice; and even identify ‘noisy’ activity levels that might indicate an area requiring further research (such as a spike in discussions, patents, or academic papers about a new technology).

Then they need to provide this feedback to research analysts. Machines, even AI-powered machines, are essentially very efficient tools for doing one thing, and are nowhere near replacing humans for many higher-level functions. They are also not going to start a project on their own – at least not in the near future! So in many areas of asset management, humans will still be needed to initiate, guide, and provide context to the work performed by machines.

An edge for quants, but difficult to capture

For quantitative investment managers, techniques such as deep neural networks are an addition to the existing quantitative investing toolkit. At CFM, all quantitative techniques, whether they use AI or not, are applied in some combination to generate ‘alpha’, or investment outperformance. They can also be very effective to reduce the cost of trading [see boxout 1]. It is now technically and economically feasible to analyse vast amounts of data that might impact the future price of a financial instrument, including:

It is an extremely complicated task to implement these techniques to predict prices. The volume and diversity of data is on a far larger scale than that processed in the back office of a bank. However, there are few quick wins. CFM’s researchers and data scientists are constantly fishing in new data sets and testing new techniques, which quite often produce only incremental improvements to the alpha strategy. It can sometimes feel like trying to find a needle in a haystack. But the algorithms do uncover many, many needles. At CFM, the number of trades generated per day can run into the tens of thousands.

The final decision to execute a trade is based on an aggregation of hundreds of signals, which indicate the degree of bias for a price to move in a particular direction. It won’t result in a profitable trade every time, but it is stacking the odds in favour of one. And when this is aggregated across the many trades executed by CFM, alpha is generated.

However, the algorithms also require continual checking to monitor their performance. A neural network is effectively a ‘black box’, which generates trades that are not possible to fully explain. This is a less comfortable situation than with the more transparent algorithms that are traditionally used, so advanced statistical techniques are used to measure their performance – against benchmarks or against existing systems – to help decide if an underperforming system needs to be modified or ‘switched off’.

The hype around AI is at a crescendo

Its commercial potential is, without doubt, enormous. But in asset management, trading results are likely to improve only gradually, and will only be significant when measured over a long period of time. For CFM, AI is simply another tool in its already diverse quantitative toolbox, which has been developing for over 25 years. The company routinely, in a systematic and disciplined fashion, analyses the latest data sets, algorithmic techniques, and hardware, to establish how they can be deployed to improve investment returns over the long term. It is easy to get up and running with AI today. What is difficult, is building up the expertise in all of the fields required to exploit it, and not fall into painful traps. CFM has done this. It combines teams of researchers, data scientists, and investment experts to ensure that technology is used, but not abused, to its potential. A tremendous amount of hard work and long-term commitment is needed. By humans. 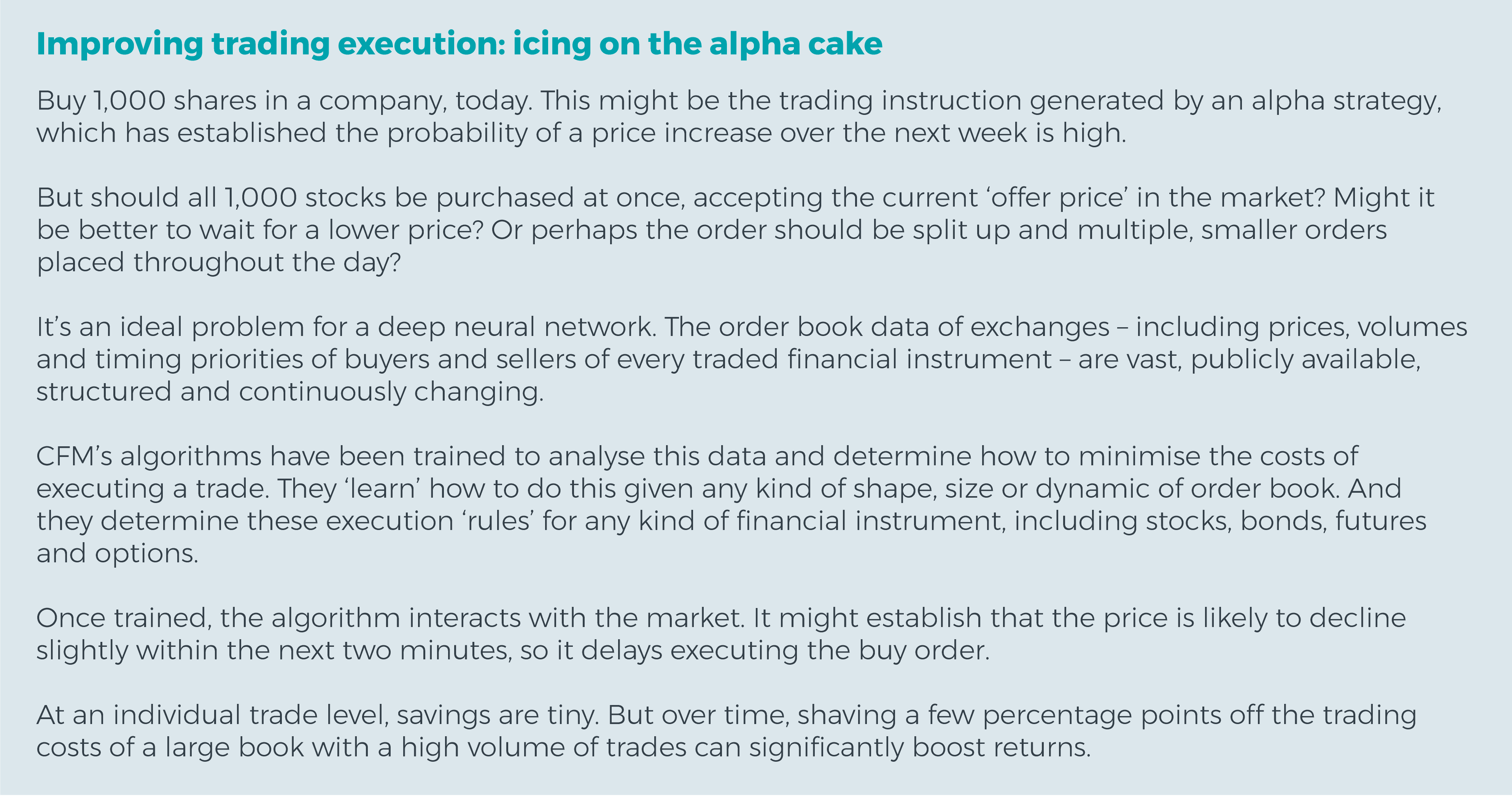 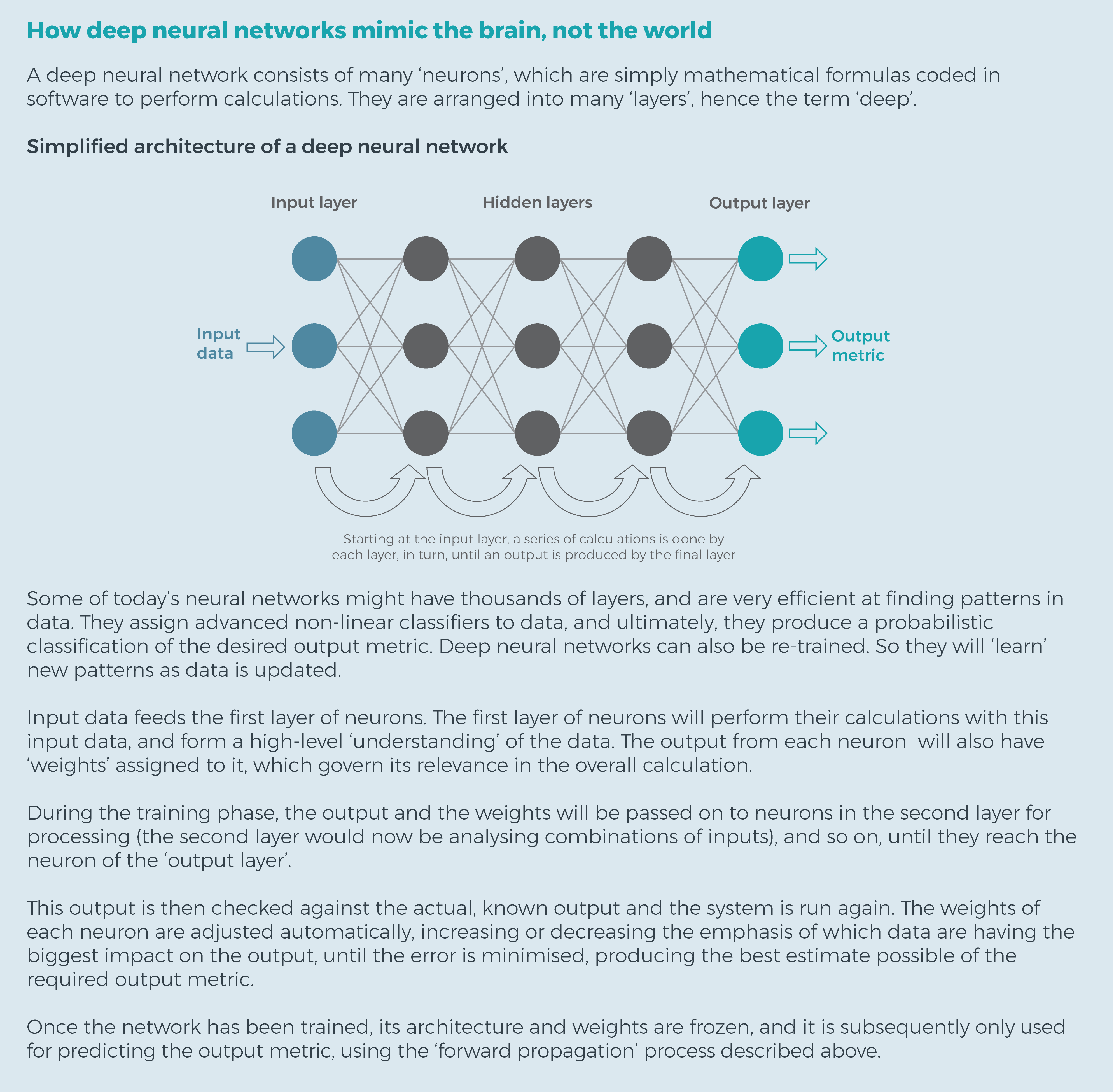 CAPITAL FUND MANAGEMENT LLP (CFM)
The products, information and other material contained on this website are only directed at investment professionals in Australia. Please note that you will be prevented from purchasing or dealing if you are not eligible for products and services offered within this site. Materials contained within this website have been made available for information purposes only. It does not contain any investment recommendations nor provide investment advice. Neither CFM nor its related entities, directors or officers guarantee the performance of, or the the repayment of capital or income invested. Past performance is not necessarily indicative of future performance. Pursuant to ASIC Class Order 03/1099, CFM LLP, the Investment Manager of the Fund, is exempt from the requirement to hold an AFSL under the Corporations Act. CFM LLP is regulated by the UK Financial Conduct Authority ("FCA") under United Kingdom laws which differ from Australian laws. These financial services are provided only to wholesale clients as defined in subsection 761G(7) of the Act. The information on this website has been prepared on this basis and is for the use of wholesale clients only. It is in no way intended for use by retail clients and should not be distributed to or relied upon by a retail client.
No, I don't agree.
Yes, I Agree.
TERMS & CONDITIONS
YES, I AGREE
CANCEL
What is a financial services licensee? A person or entity is a financial services licensee if they hold an Australia financial services licence issued pursuant to the Corporations Act 2001
BY CLICKING ON 'I AGREE', I DECLARE I AM A FINANCIAL SERVICES LICENSEE AS DEFINED IN THE CORPORATION ACT 2001.